Bonnie Spencer started her career as a professional dancer for many years especially when touring in Joseph and the Amazing Technicolor Dreamcoat with Philip Schofield.

Bonnie has been hosting live Sooty shows on and off for approximately 13 years. She presented Sooty at various Pontins camps for two summer seasons and stood in for Richard Caddell in a theatre tour for six weeks whilst Richard was filming for TV. Bonnie also appeared with Sooty at Blackpools puppet-up festival and performed with Sooty and friends at the Liverpool Children's Museum. She hosted Sooty at Brean Leisure Park on various dates throughout 2015 and has been presenting the Sooty shows at Cadbury World for four years.

In 2018, she made a guest appearance in the third season of Sooty as a rodeo operator during Mr. Slater's Wild West event in the episode Wild Wild West. 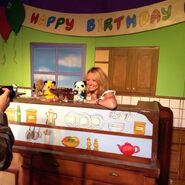 Bonnie presenting a live show at Cadbury World
Add a photo to this gallery
Retrieved from "https://sooty.fandom.com/wiki/Bonnie_Spencer?oldid=13058"
Community content is available under CC-BY-SA unless otherwise noted.