He was unavailable for the majority of the third series. However, he does work on the third episode, Who's Got Talent?. He also appears in the series finale, Just Deserts, standing in the queue outside Mr. Slater's ice-cream shop. 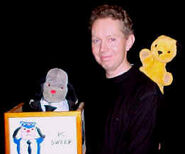 Brian (left) with Brenda Longman and Dave Benson Phillips
Add a photo to this gallery
Retrieved from "https://sooty.fandom.com/wiki/Brian_Sandford?oldid=13114"
Community content is available under CC-BY-SA unless otherwise noted.