"We were only pulling your leg!"
"That's not possible"
"Oh, of course not"
— Matthew and Sooty

Happy Birthday Sooty is an episode from The Sooty Show in 1992.

It's Sooty's birthday and he thinks that Matthew, Sweep, Soo, and Scampi have forgotten. Later, they all surprise him and sing 'Happy Birthday' to him. Matthew gives Sooty a video cassette which contains old episodes. Then Matthew takes Sooty to The World of Sooty museum in Yorkshire where they have a look at some old sets. Later, Matthew arranges one last surprise for Sooty at his birthday tea - Rod, Jane and Freddy, who sing Sooty a birthday song. 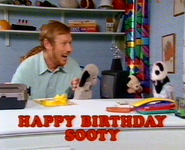