Deafness in one ear precluded Corbett from pursuing his musical ambitions although he did have a spell playing piano in the world famous Guiseley fish and chip restaurant owned by his mother's brother Harry Ramsden. His parents also had a fish and chip business in Guiseley called Springfields, which is still open today.

In order to entertain his children whilst on holiday in Blackpool in 1948, he bought the original glove puppet, then called Teddy, in a novelty shop on the end of the resort's North Pier for seven shillings and six pence.

His first appearance with the silent Sooty was in a 1952 BBC TV show called Talent Night. He was then given a part in Peter Butterworth's TV show Saturday Special. He soon gained his own show and was a regular favourite throughout the 1950s and 1960s. His show would combine simple magic tricks with slapstick comedy in which Sooty usually poured liquid over or attacked Corbett.

After suffering a heart attack at Christmas 1975, his younger son, Matthew Corbett, took over, eventually buying out his father for £35,000. Harry continued his one man stage show even after he gave up his TV appearances, which understandably annoyed Matthew.

Harry Corbett and his wife Marjorie lived in the Dorset village of Child Okeford, Blandford Forum for most of their married life and it was here where he died in his sleep on 17th August, 1989, after playing to a capacity audience at Weymouth Pavilion.

Harry is credited for providing the story for the second series episode of Sooty, Sooty's Space Rocket which was adapted by Wink Taylor from one of Harry's original episodes.

Harry Corbett had also appeared in "Rainbow" and "This Is Your Life".

Harry with Sooty and Sweep 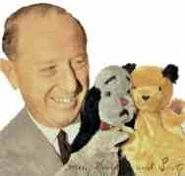 Harry with his sons and Sooty 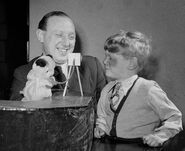 Harry with Sooty and his eldest son David