Knitting is an episode from The Sooty Show in 1992.

Despite the fact that Sooty and Sweep are two of the naughtiest boys she knows, Soo has made presents for them: a new jumper each which she has knitted herself. However the new items of knit-wear are too big for Sooty and Sweep to use, so they decide to try and shrink them as that is what wool is famous for. First they try shrinking the woolies in bath water, to no avail. Next they try in the washing machine, but this does not work either. Then they use the tumbledrier, but now the jumpers have shrink to the sizes of gloves.

Feeling intimidated by Sooty and Sweep, Soo shows her ruining needle work to Matthew, but he just laughs too. Annoyed, Soo states that Matthew knows nothing about knitting. This is of course a gross understatement; Matthew has recently purchased a knitting machine, so that he can make some more money out his very own homemade knitted scarves. Soo and Sweep ask if they can have a go on the machine, but Matthew say they can only use it if they can supply their own wool. So while Matthew is busy make a ball of wool into an extra long scarf, Sooty and Sweep smart collecting up some of their own wool by making Matthew's extra long scarf into a ball of wool. Then while Matthew takes a tea break, Sooty and Sweep take their chance to have a go on the knitting machine.

When Matthew finds out that Sooty and Sweep have destroyed his extra long scarf to make their shody jumpers with too many arm holes and no head holes, he chases after them. Sooty and Sweep are not hard to find as they have left a trail of wool behind them, leading to where they are and Matthew finds them hiding in a box of junk in the attic. To show they are sorry for what they have done, Sweep shows Matthew an old book with a £50 note he had forgotten he had left inside it. Instantly Sooty and Sweep are forgiven and Mattew uses the £50 to buy woolly clothes them and Soo. But Matthew is not the odd one out, as Soo has knitted him a jumper too with her, Sooty and Sweep having a picnic on the front of it. Sooty, Sweep and Soo then bring this episode to end with a knitted fashion show. 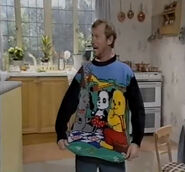 Add a photo to this gallery
Retrieved from "https://sooty.fandom.com/wiki/Knitting?oldid=11424"
Community content is available under CC-BY-SA unless otherwise noted.