Sooty, also referred to as The Sooty Show, aired throught September and October 2011 on the CITV channel. It was filmed largely at Richard Cadell's theme park in Somerset, Fun City in Brean Leisure Park, also the location of the feature-length direct-to-DVD special, The Big Day Out which also acted as a pilot for this series.

Magician Paul Daniels made the news when Sooty "supposedly injured him with a pizza" during filming for the episode, Pizza to Go. It was reported that the shot took two takes and, on the second, puppeteer Richard Cadell used too much force in throwing the pizza and some went into the magician's eye, resulting in him being taken to hospital. Paul Daniels recently announced, via Twitter, that the incident was blown out of proportion and that it only stung his eye momentarily and only popped into a countryside hospital on his way home to have some drops administered just to be on the safe side.

Afterwards, Daniels insisted they use the take in which he got injured and a spokesman said he was a "good sport".

John Shuttleworth told Digital Spy that he tried to persuade the production team to use something else such as a burger or hot-dog instead. He also suggested that they didn't cook the pizza so much.

In November 2011, the situation was used in the "odd one out" round on the BBC1 panel show "Have I Got News to You", regarding people that have been injured by food.

The event was briefly mentioned by Richard on the 30 Years of CITV documentary in late 2012. He said that Paul Daniels was knocked out, contrary to what Paul Daniels had previously said about the incident being blown out of proportion. Richard goes on to say that there was a feeling on set that they had all gone too far and it was no longer funny.

Since then, the production crew has had to draw up risk assessments before stunts such as this should be achieved again.

Series 2 will start airing from Saturday September 7th, 2013. It will consist of twenty-six episodes. Filming began for the series in May 2013. This is the first season to be owned by Cadells Ltd.

A third series of the show was announced by the official Twitter on 15th April 2018. Filming started in June with the episodes airing later on ITV Be's new three hour children's slot "Little Be" on September 3rd. The episodes are written by Richard Cadell, Alex Skerratt and Richard Gauntlett. Guest stars for this series include Lisa Riley, Faye Tozer, Peter Andre, John Challis, Rich Roberts, Danny Rogers and Bonnie Spencer.

Brian Sandford was unavailable during filming to be Sweep's puppeteer and voice (although he makes a brief return in the third episode) and Martin Rose also stepped down as a puppeteer. They were replaced by veteran puppeteer Ronnie Le Drew and Phil Fletcher. Wink Taylor also did not return to the series, but Mandy Glass returns, credited as a puppeteer on several episodes. 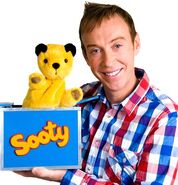 The Sooty puppet used in the series
Add a photo to this gallery
Retrieved from "https://sooty.fandom.com/wiki/Sooty_(2011)?oldid=13242"
Community content is available under CC-BY-SA unless otherwise noted.