Splashing Out, also known as Plumbing the Depths, is the third episode of series one of Sooty & Co.

There are problems with the plumbing at Sooty & Co. Scampi tries to rectify the problem, but only succeeds in making it worse. After buying some tools from Mo, Sooty and Sweep head up into the attic to solve the problem.

Meanwhile, outside, Matthew is have trouble with water himself when he gets caught in the rain, splashed with a big puddle, gets caught in range of a park sprinkler and falls in a lake.

Back in the attic, Sweep has made things worse so Sooty uses his magic wand to put the situation right. Unfortunately, Sooty's magic has made all of the water in the building "magical". Water starts to squirt from the shop counter, but Shahid Malik the magician arrives and sorts out all of their problems and even makes a water fountain appear by magic. Shahid likes the fountain so much that he buys it for twenty-five pounds. The gang celebrate their windfall until Scampi presents them with a water bill...

Sooty and Derek the duck 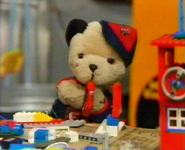 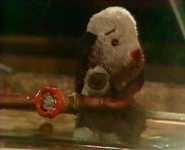 Add a photo to this gallery

Retrieved from "https://sooty.fandom.com/wiki/Splashing_Out?oldid=12750"
Community content is available under CC-BY-SA unless otherwise noted.