"I'm going to get my brother onto you!"
"I'll get my dad onto you, he's bigger than your dad"
"How do you know?"
"I've seen your dad!"
— Matthew in an argument with the photographer

Super Star is an episode of The Sooty Show from 1984.

Sweep sends a tape of him singing to a radio singing competition, which he surprisingly wins! Sweep isn't sure he wants to be a pop star because he has no privacy any more, photographers are trying to take his photo, and he's getting chased down streets by children wanting his autograph. They manage to hide inside a recording studio where Matthew meets his most favourite singer - Alvin Stardust! Alvin Stardust has written Sweep a song which they record together! 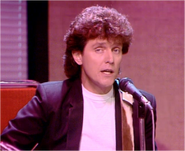 Alvin Stardust
Add a photo to this gallery
Retrieved from "https://sooty.fandom.com/wiki/Super_Star?oldid=11492"
Community content is available under CC-BY-SA unless otherwise noted.