"What's five minus three?"
"Can I use a calculator?"
— Matthew testing Sweep

Sweep is a British puppet and TV character popular in the United Kingdom, Australia, New Zealand and other countries.

History with the series

Sweep is a grey, glove puppet dog with long black ears and a red nose who joined The Sooty Show in 1957, as a friend to fellow puppet Sooty. His general dim witted behaviour and penchant for bones and sausages has made him an endearing, entertaining character that children still love to this day.

Probably his most unusual characteristic is his method of communication. It consists of a loud high pitched squeak that gains its inflection from normal speech and its rhythm from the syllables in each word. The rest of the cast could understand Sweep perfectly, and would indirectly translate for the viewer. The original puppeteer (Harry Corbett's brother, Leslie) achieved the sound of Sweep's voice using a saxophone reed.

It is known that, unusually for a glove puppet, Sweep wore wellingtons as several of the more slapstick routines involved his getting upended, leaving his wellies flailing helplessly in the air.

Matthew Corbett also operated and voiced him on numerous occasions throughout the Sooty Show, Learn With Sooty and Sooty & Co.

Sweep with a joke nail through his paw

Sweep in a hiking outfit 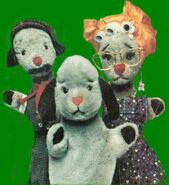 Sweep with his parents 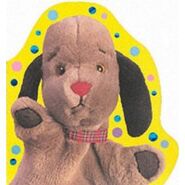 Sweep, Sooty and Soo on "Children in Need"

Sweep, Sooty and Soo on "The Matt Lucas Awards"

Sweep as Pavarotti on "The Matt Lucas Awards"

Sweep with Sooty, Soo and the Corbett Family

Sweep on "Bargain Hunt" with his 'own stall'

Sooty and Sweep on "Bargain Hunt

Sweep with Sooty, Richard and Debbie McGee on "Bargain Hunt"

Sweep at the Auction on "Bargain Hunt"