The Big Day Out

View source
watch 01:36
We're Getting Mutants in the MCU - The Loop
Do you like this video?
Play Sound

The Big Day Out is a direct-to-DVD special released in 2009, five years after the latest series ended. It is the start of the new Sooty series. This DVD was re-released in 2013 for Poundland stores.

Richard is taking Sooty, Sweep, and Soo to the seaside, but in true Sooty Show style - nothing goes to plan.

Sooty, Sweep, Soo and Richard are traveling in their van to go on holiday, and are excited about the talent contest that's happening later on in the day.

As they get along the way, the van breaks down and Richard wonders if the engine has ran out of oil. Richard tries to call the roadside assistants on Sooty's behalf, but it ends up the "roadside assistants" are just Sooty and Sweep, who the former ends up causing a menace for Richard by using up all the oil to squirt him and Sweep. However, Sooty's magic wand saves the van and cleans up both Richard and Sweep.

Eventually, they arrive at their destination and everyone is excited for a particular thing - Richard is excited about the Talent Show, Soo is excited about the funfair, Sweep is excited about the sausage van, and Sooty is excited to go to the drinks machine. Richard however is prepared with cans of pop and some dog biscuits (that Sweep snook in) and decides to drink one, which sprays all over him. Everybody then notices that Sooty has vanished, and so they all attempt to find him ("Hey, Where is Sooty?").

When they reach the funfair, the gang have still not found Sooty, and decide to ask a security man to see where he could have gone. However, the man cannot recognize Sweep's squeaks, so Soo instead asks where Sooty was, but he is a bit concerned about who he looks like and thinks the gang are "having a laugh". Richard then tells him, until Sooty (hiding in Richard's bag) burps due to the fizzy pop, to which the security guard thinks Richard burped, and reveals his name to be Bob. Bob then finds out that it's coming from Richard's bag, which he looks into only to be sprayed by the pop. Sooty reveals himself and gets clicked in by Bob, and notices something surprising, but the gang thinks they're in deep trouble, so they all take off.

Sooty, Sweep and Soo find themselves near the roller coaster, which Soo wants to ride on. She notices she is way too small for the coaster, so Sooty uses his wand to make Soo, Sweep, and himself taller, completely confusing the ride attendant.

When they get on the coaster, Sweep feels hungry for ice cream, and so the gang go and get ice cream while returning to the roller coaster. Meanwhile, Richard has escaped Bob and notices the puppets on the roller coaster, so he decides to do some puzzles to pass the time. However, that doesn't last long when the speed of the coaster causes all the ice cream to go on Richard, which the puppets don't even notice until Richard reveals himself, covered in ice cream. Sooty, Sweep and Soo decide to go to the Doughnut stall, so they head off there, while Richard plans to get cleaned up, accidentally flicking ice cream at Bob, who notices him and chases him round the park again. 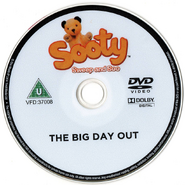 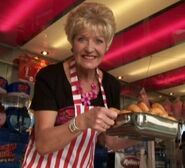 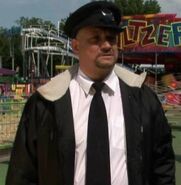 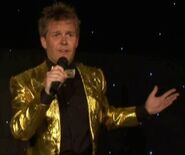