The Sooty Show is a DVD featuring episodes from the 2011 series of Sooty.

This DVD is crammed full of magic, mayhem and mess to fill every child with giggles and laughter. Follow the adventures of Sooty, Sweep and Soo as they join their right hand man Richard in five fun packed stories.

Back cover and spine 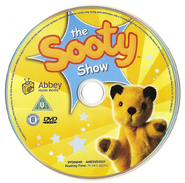 Episode selection menu
Add a photo to this gallery

Retrieved from "https://sooty.fandom.com/wiki/The_Sooty_Show_(DVD)?oldid=12709"
Community content is available under CC-BY-SA unless otherwise noted.